@Fernie: Finally got around to listening to your piece. I enjoyed it a lot and have listened to it a few times now. A nice mixture between the dramatic and the restful, and simply very nice and melodic. The track titles help me piece together the story as well. As a laywoman, I can't really tell what's rough about the sound, but I trust you to know how to fix it. In short, very good work; I'm very happy that you share it with us.
Broke: what I am on the 25th of each month
Woke: what I did this morning
Bespoke: clothes that are made to your individual measurements
Top

I'm really thankful for the comments! I know that finishing this work will be quite a challenge, so every bit of encouragement I get will be put to good use.

I already started working on a new part of the album, but I found it too sketchy and rudimentary to share, so once it's in better shape, I'll put it up.
"This is the scientifical truth, which is much better. You shouldn't let poets lie to you."
-- Björk
Top

Consider yourself motivated by my desire to listen to it.

Broke: what I am on the 25th of each month
Woke: what I did this morning
Bespoke: clothes that are made to your individual measurements
Top

More Joker/Sophie. Nothing untoward is happening, they're just making out.

Last edited by c_nordlander on Mon Apr 20, 2020 7:17 pm, edited 1 time in total.
Broke: what I am on the 25th of each month
Woke: what I did this morning
Bespoke: clothes that are made to your individual measurements
Top

Sometimes I feel like dressing up my Gaia avatar.
Feels kinda pointless since I don't actually do stuff at Gaia, so I'm putting it here.
Top

You did a really good job with the poses, Chris! That's not an easy one to pull off, and they look very convincing. Their faces look good too. Overall, this is one of the best pics you've shown us yet.

I love the new bit of the story, Alex, mostly due to how you write Rainbow Dash. She's already a super fun character, and you know how to highlight her funniest traits while still keeping her charismatic. It's not that I'm trying to influence your creative decisions, but I enjoy it when Meteorite interacts with her.

I guess I'm gonna throw in my own creation in here as well: this is another fragment of the novel I'm working on. There's a lot of context missing, and several readers were confused by the apparent switch to first person halfway through, so here: the whole story is written in first person from the perspective of Carol, and, for reasons explained elsewhere in the story, she's also a not-quite-omniscient narrator. The part I actually wanted to show starts at the end of page 2, but I got greedy and included a bit before that too. There are eight main characters in this story, and I'm starting to really sink my teeth into who they are and flesh out their relationships, so I guess I wanted validation.
"This is the scientifical truth, which is much better. You shouldn't let poets lie to you."
-- Björk
Top

Thank you for the high praise, Fernie. I'm not gonna lie: two full-figure characters in one hour is almost beyond my capacity, but hearing that I'm improving is extremely motivating.

@Alex: looking forward to seeing where this story is going! As others have said, Rainbow Dash is very in character in this scene, and the writing and dialogue continues to be good. Meteorite wanting Dash's approval is good writing: it's one of those little things that seem irrational on paper, but that actually influence quite a lot of our lives. "The most pegasus pegasus" is still great.

@Fernie: hard to really comment without having read the surrounding story, but you have plenty of good writing here, especially in the scene from Carol's point of view. And playing around with POVs is totally cool, it just threw me a bit.

Also, a lot of Carol's new friends' names seem familiar...
Broke: what I am on the 25th of each month
Woke: what I did this morning
Bespoke: clothes that are made to your individual measurements
Top

Just a tiny bit of what I wrote for my upcoming (?) Seymour and Edna fic, been working on a bit more lately, if everything goes right I'll post a part in some days 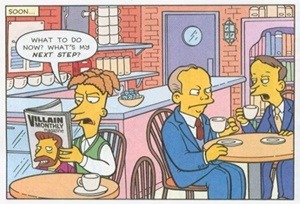 (I Bought Myself a Liarbird - XTC)
Top

Yeah, I guess they should be. This is a reworking of a very, very old story, which I seem to have published here in... [i[some[/i] state. I'm hoping that this is the final and definitive version, 'cause, seriously, enough is enough. The writing history of that novel is kinda cursed, since the original idea dates from almost 20 years ago, and thus the story was plagued with terrible decisions I made as a teenager. I'm making some significant changes, and trying to get deeper into the essences of these characters, and I think I'm succeeding.

EDIT: regarding K's fic, as I mentioned in chat, I'm really eager to see where the story is going. The writing and characterisation are very, very good.
"This is the scientifical truth, which is much better. You shouldn't let poets lie to you."
-- Björk
Top

@Carol: to start with, this is a *great* opening for a story. Most parents would draw the line at trying to ruin their child's wedding, but not Agnes. The writing is good, and you got the tone right for both Agnes and Seymour. The mention of Sheldon Skinner provides a bit of backstory about the Skinner family, something we're not overly spoiled with. Also, I'm positive to Skinner/Krabappel content in general (I don't ship them as such, but I disliked the way the show broke them up).


One punctuation nitpick I forgot to mention in chat (and don't feel that I'm singling you out; this is something a lot of new writers mess up): you treat the dialogue tag ("he said" etc.) as a separate sentence, which it isn't. So in the following snippet


“Go. Just don’t think we’ll be the same after today.” She finally answered

"she finally answered" doesn't stand on its own, but follows on the dialogue. Therefore, the dialogue line shouldn't end with a full stop, but with a comma, and "she" shouldn't be capitalised. This is how it should look:


“Go. Just don’t think we’ll be the same after today,” she finally answered

If the dialogue tag starts with a proper name ("Agnes," for example), the name is of course capitalised, but you should still end the dialogue line with a comma. Likewise, even if the dialogue ends with a question mark or an exclamation mark, you shouldn't capitalise "he" or "she".

Dialogue tags should be distinguished from when the dialogue line is followed by something that *is* a separate sentence. Take this hypothetical example:


“Go. Just don’t think we’ll be the same after today.” She fiddled with her knitting, not looking at Seymour.

Here, the bit after the dialogue isn't a "she said"-style tag, but a separate sentence of description; therefore, I end the dialogue with a full stop, since it's a finished sentence.

Apologies for the long explanation; I just figured I'd get it out of the way early on. Like I said, great set-up and good characterisation and writing; if you write more, I'll look forward to reading it.
Last edited by c_nordlander on Wed Apr 22, 2020 12:59 pm, edited 1 time in total.
Broke: what I am on the 25th of each month
Woke: what I did this morning
Bespoke: clothes that are made to your individual measurements
Top

Thanks for the revisions, Chris. Like I said, if this was written in my mother tongue the grammar choices I made would make more sense, but since it's not, it's good to have someone to correct those.
I'm glad you guys liked it, I'm probably posting it on a thread of its own once I'm finished with more pages

(I Bought Myself a Liarbird - XTC)
Top

Glad to hear I wasn't being overbearing.

Sounds like a good plan!
Broke: what I am on the 25th of each month
Woke: what I did this morning
Bespoke: clothes that are made to your individual measurements
Top

It's not easy having a younger sister who can take any impact without harm and knows it.

I memorized "Holy Grail" really well
I can recite it right now and have you ROTFLOL
- "Weird Al" Yankovic, "White and Nerdy"

"Any pile of stunted growth unaware that entertainment is just that and nothing more, deserves to doom themselves to some dank cell, somewhere, for having been so stupid!! Movies, books, T.V., music - they're all just entertainment, not guidebooks for damning yourself!" - Nny

I draw too, dammit!
Top

Fine background, and you've got an immense amount of character into their faces. Really feels like something you'd see on the show (if they aged up the characters... oh well, a girl can dream).
Broke: what I am on the 25th of each month
Woke: what I did this morning
Bespoke: clothes that are made to your individual measurements
Top

Some Venture Brothers fanart: Triana Orpheus having visions of an evil version of herself or something. Tangentially related to Star Wars in honour of the date, since it was inspired by Rey seeing visions of her Dark Side self in "The Rise of Skywalker". Also related to my VB fic Raven Must Die, where Triana fights a demonic double of herself, though this exact scene didn't happen in the story.

I didn't actually intend for evil!Triana to come off as quite so... grabby, but I saw the opportunity for added creepiness and couldn't turn it down.

Regarding evil!Triana having a hairstyle more like the canonical one has on the show: I have this fuzzy headcanon that Triana started growing her hair out and wearing impractical robes once she left home to become a sorceress, because of course she would. evil!Triana comes from a dimension where the supernatural is commonplace, thus, while she's still a powerful sorceress, she would never have gone through the same conceptual breakthrough, and would still wear mundane clothes and a more 2000s-fashionable hairstyle.

Broke: what I am on the 25th of each month
Woke: what I did this morning
Bespoke: clothes that are made to your individual measurements
Top
Post Reply
493 posts